2013 was a huge year for me artistically.

Technically it began in the late summer of 2012 when I first read Stephen Pressfield’s books The War of Art and Turning Pro.   Those profoundly ass-kicking books woke me up from an artistic stupor and, combined with Quinn MacDonald’s gentler advice to choose a “Word for the New Year“, they led me to make 2013  a year of change, progress and difference both artistically and personally.

My Word for 2013 was “Persevere“.  I chose it with an eye to exploring, learning and creating as much as I could, as part of taking my first baby steps into the world of the professional artist.

In 2013 I created nearly 50 finished works of art of which I am very proud (and another 50 or more that could be called “just practice”). Many of the finished pieces are not for sale and several more were painted since I last attended an artist-run venue, and I sold four at the three I participated in.

By a stroke of fortune, before that could happen, I found the Duxbury Road (and Mercer Collective pop up and art sale) and I took my very first toddle.  It was an exhilarating step for me, and afterwards, I looked forward to Art Walk with enthusiasm instead of trepidation.  For the three days of Art Walk, I set up my displays and tables on the sidewalk  with the help of my wonderful and incredibly supportive husband (and talented writer) Robin, and I revelled in the experience of sharing my work with all the people who came out to see local art and talk to the artists, and I sold three of my paintings.  Less than two months later, I participated in a one day Pop-Art sale and sold a fourth painting.

2013 was a successful year for me not because I sold four paintings, but because I first accomplished and then exceeded the goals I set myself and put myself in a position to show and share – and sell – my work.

Until then, here is my last painting of 2013  “Winter Night at Jackie Parker Park”, soft pastels on Colourfix sanded pastel paper, 7 ½” x 5 ½ ” (from a photo taken last year, when we went for a walk just before midnight on New Year’s Eve 2012) : 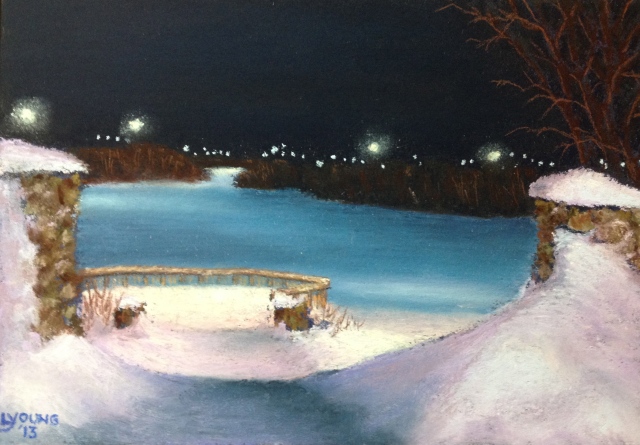