A New Word and a pastel “Selfie” portrait for Twenty-Fourteen

My Word for 2014 is “Persistence”.   It’s not meant to represent a new start, but rather the next step on the path I chose last year.

I ended 2013 with one last painting (below), a self-portrait in soft pastels with the idea that I would make a  (very) long-term goal of painting a self-portrait on the last day of every year for as long as I am able to do so.  And, since the last day of the year is just a few weeks after my birthday, they can also serve as annual birthday portraits too, a record of the changes I see in myself as I grow older (and hopefully better as an artist).  Robin tells me I don’t really look like this (far too severe) and I know he’s right.  It’s a serious, intensely focused, expression – but it’s what I saw in the mirror, and it expresses the focus and determination I have and will need to move forward. 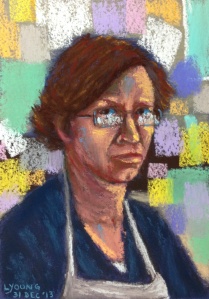 The artistic journey I am on began long ago, almost literally hidden in the mists of my childhood but it grows clearer to me every day as I take each step forward on the path.  It’s an incredible journey, and I am so happy – and blessed – to be here.  Paint on!  Happy New Year!

On a different kind of personal note:

Robin and I both fell asleep watching the TV countdown to 2014!  (I had been dozing off and on all evening – it was a long and exhausting day – but I finished my “Selfie”!)

Fortunately, Robin woke up in time to nudge me just before midnight to pop the champagne and have a glass and welcome the New Year together.   When I went downstairs to invite my son Dan and his friend to join us I discovered that his friend had left but that my ex had arrived, and the two of them were ringing in the New Year themselves.  The four of us (my husband, my son and my ex-husband) then congregated in the kitchen and welcomed 2014 together.  It was one of the weirdest New Year’s Eves I think I’ve ever had.  Weird in a really positive kind of way.